The Brazil Learning Initiative for a World without Poverty (WWP) was an interinstitutional partnership signed in 2013 between the International Policy Centre for Inclusive Growth (IPC-IG), the Institute for Applied Economic Research (Ipea), Brazil´s Ministry of Social Development (MDS) – formerly the Ministry of Social Development and Fight against Hunger – and the World Bank Group (WBG).

From 2014 to 2017, WWP prospected, documented and disseminated, in several languages, ??the innovative social protection policies and anti-poverty solutions implemented by Brazil. WWP also fostered knowledge exchange and the pursuit of good practice among policy makers in other countries.

As from January 2018, WWP’s website will be managed exclusively by the Ministry of Social Development.

These efforts resulted in more than 250,000 publications being downloaded in 184 countries and an annual readership growth rate of over 100%. 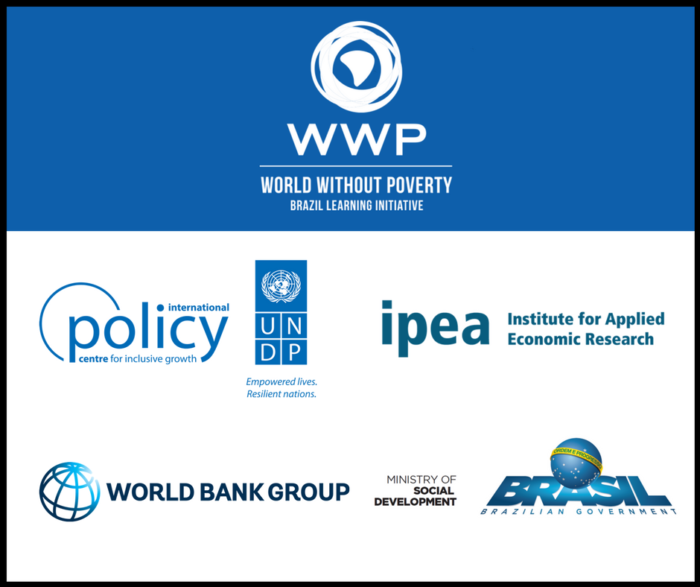 WWP´s founding partners were active from 2013 to 2017. The Initiative’s website is now managed by Brazil´s Ministry of Social Development

Brazil´s drew attention of the international community to the substantial progress achieved in poverty reduction and inequality resulting from over a decade of the Bolsa Familia conditional cash transfer program and other successful social policies.

Achievements included a steep reduction of the number of Brazilian citizens living below the national poverty line (from R$ 170 in 2016). According to the World Bank, more than 29 million people emerged from poverty in Brazil during the phase of socioeconomic progress between 2003 and 2014.

This achievement awakened international interest and led to 455 delegations from 107 countries coming to Brazil between 2011 and 2016 to familiarize themselves with subjects such as conditional income transfer, food and nutritional security, social assistance, productive inclusion, monitoring and evaluation, etc.

The technical material produced by WWP – case studies, fact sheets, videos, seminars and so on – is targeted not only at public policy makers, managers and researchers but also at a wider general readership.

WWP publications can be accessed on:

– The socialprotection.org platform
– The online library of the National School of Public Administration (Enap) (case studies only)